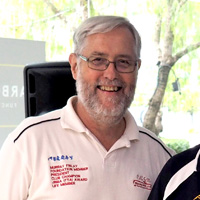 I’m a Foundation member of the Club, having joined in 1990, and am a Life Member, Hall of Fame member and now Club Legend.

I’m back for (I think) my fourth stint on the Committee. I’ve served 26 or 27 years on the Committee, including six terms as President and 12 as Vice President, plus other stints (way back) as Secretary, Social Captain, Membership Officer and Treasurer. I was Club Champion in 1994 and 2010 and have received the Jinba Ittai award three times, in 2006, 2014 and 2020.

In addition to my “new” role in Membership, I am continuing to edit and produce the Club’s monthly magazine, mxtra, which I have been managing for longer than I can remember!

My wife Alyssa, who designed the mxtra layout and most of the Club’s badges, is also a Life Member of the Club.

We have loved our 32 years in the Club, making great friends and travelling all over Victoria and Tasmania through Club events, as well as attending six NatMeets in four states since the inaugural one in Adelaide in 1994.