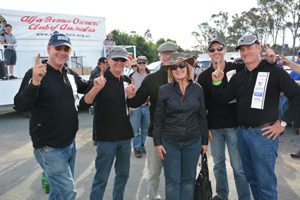 While technically not a “race” (those who compete may differ slightly), one of the key highlights of our motor sport calendar every year is the AROCA 6 Hour at Winton Motor Raceway near Benalla in Central Victoria.

This is a weekend-long motor sport overdose with teams of drivers all competing against the clock to match a pre-nominated lap over a six-hour straight period.

That’s right. The event goes for six hours non-stop with approximately 200 drivers in an amazing mix of cars competing in relay teams of four, five or six drivers chasing the clock to achieve the highest number of laps against their calculated target.
Sounds easy … be assured it is not.

After many years of trying, including a second place in 2011, last year the MX-5 Club scored its breakthrough win with the Flyin’ Miatas producing the goods, with a BMW team in second place.

This year the Flyin’ Miatas were back endeavour-ing to do what many thought impossible, back to back wins. There were also two other teams from the MX-5 Club, City Mazda Motorsport and Team MX-5 Motorsport also keen to keep them honest.

So in all the Club had a commitment of 15 drivers and a total of 14 cars plus volunteers, friends and family members for a entourage of 30 plus people.

Saturday practice did not go as planned and at times our collective pit areas seemed more like those of teams using certain anonymous southern European-built machinery as bolts fell out, things broke, belts flicked off and in particular we had a run of brake issues. So not the usual picture of mechanical reliability that we all are so used to! However, in true Club spirit, it was a matter of all-in to help each other and we even witnessed suspension components being changed between cars in order to ensure everybody completed the designated number of qualifying laps.

After a more chaotic practice day than we are typically used to, nominated times were submitted and everybody retreated to those great friends of our Club, the North Eastern Hotel in Benalla, for an excellent three-course meal and drinks in their private dining room. The evening also included a few very noteworthy speeches with, in particular, much praise being directed towards the race driver training skills of the esteemed Motor Sport Captain.

Relatively early to bed and race (oops) regularity day dawned with the obligatory and mandatory dozen eggs, half a kilo of bacon and half a loaf of bread high-protein-early-morning breakfast at the Benalla Bakery (if you have never been there, try it). With arteries suitably armour plated, it was off to the track for the pre-event formalities before the flag dropped.

This year the Flyin’ Miatas were led by Peter (“Princy”) Phillips with a team of Max (the Legend) Lloyd, Stephen (the Assassin) Downes, Noel (the Quiet One) Heritage and Robert (the Placid One) Downes – all ably supported by our volunteer Pam (Cupcake) Phillips.

“Princy” Phillips was first away and after a few laps behind the Safety Car was settling down well and starting to knock out bonus lap times. That was until lap 12 when, in overtaking a slower competitor going into turn 1, Peter’s beloved NB decided to leave the racing surface at a great rate of knots. After the ensuing cloud of dust had cleared, it could be found to have had a pretty high-speed coming together with the tyre and concrete barrier surrounding the nearest flag marshall’s post. What was previously named Monik Corner is now renamed Princy Corner for evermore.

Safety car deployed, flags waving and ambulance on the way. Fortunately Peter was OK but the beloved NB was very very second hand. Much action in the pits as Robert Downes sprinted to the Control Tower for a replacement sash and Max Lloyd readied himself. Shortly Max was away and the battle to recover was on. Max did a stellar job with many bonus laps before handing over to Noel who was sent to continue the climb back. One complete tank of gas, 160km, blistered hands and more bonus laps later, Noel was dragged back in and Stephen took over for his usual super-polished effort banging out the team-high number of bonus laps.

With just over an hour to go it was Robert’s turn to hit the track with the long-suffering NA8 that he shares with Noel. Add a total of 120km to Noel’s previous 160km and that poor suffering car had been carefully and placidly (?) driven around Winton Raceway for a total of 280km on one (quite hot) race (oops again) reliability day (plus no doubt doing at least 160km the day before in practice) with tyres and brakes ultimately screaming “enough!” towards the end of it all.

Still, Robert brought it home with some more bonus laps in the bag and then – after six hours of motoring mayhem – all we could then do was pack up and await the results with everybody else.

Now, as part of the fun, AROCA do tend to drag out the presentation ceremony a wee bit announcing every placing from 40th down with seeming innumerable breaks to thank sponsors, make special awards and draw the raffle etc. After what seemed like an age we finally got to the top five and then slowly worked to the top two teams. After yet more good-natured delays, the Club Mini motor sport team was announced as second placegetters … which meant that the Flyin’ Miatas had yet again (and especially after Peter’s unfortunate rallycross excursion) won and pulled off fantastic back-to-back wins.

Not bad for a team that (naturally excluding Cupcake) has the surprising statistics of a combined total age of 300 years, average age of 60 years and includes two retirees, one almost-retiree and boasts two Seniors cards! Mature age (plus a dash of youth, that’s Stephen and Noel) and cunning wins again!

Furthermore, Team MX-5 Motorsport had achieved an outstanding sixth outright (especially noteworthy with three first-timers in the Team) and City Mazda Motorsport had also achieved a very creditable 16th out of the 40 teams competing. City Mazda Motorsport team member Kim Cole didn’t have a good day at all and did a latter-day impersonation of Barry Mulholland at Bathurst in the late ’60s (look it up in the Bathurst history books). Overall, a great result by all MX-5s and well done by all!

Despite the euphoria and after thanking the AROCA organisers, we than had to retire to the solemn task of dragging Peter’s very busted car on to a trailer for the trip home.

This annual weekend is a fabulous time for all, regardless of win (naturally preferred), lose or draw. The comradeship and fellowship amongst our members is unique. I must finish with a very special mention of the exceptional efforts put in by Club Captain – Motor Sport, Daniel White, and Assistant Captain, Tim Emery, in obtaining a range of sponsorships and support packages for all the members of our three great teams.