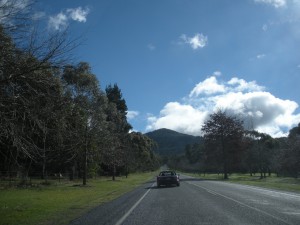 Heading off on the Central Chapter run from Melbourne to the Club’s annual awards lunch at Macedon was an opportunity for my driver to give the navigator a lesson on the difference between the NA, NB and NC Mazda MX-5 models.

Given my level of car identification sits at the red car/blue car level, the run from Melbourne to Macedon was always going to be too short to really get to grips with life’s big questions – such as the relative merits of the A, B or C models.

Eleven MX-5s (five NCs, three NBs and three NAs!) plus Tony Heasly in his “family MX” (BMW) headed west over the Westgate bridge for an easy run up the freeway to the Melton/Gisborne turn off. For some of us it was our second time over the bridge as we missed the slip lane into the starting point the first time around!

Joining the run were first timers Alison and Adam Trapski (in their silver grey NC) who brought along their very cute puppy for his first Club run too. We hope to see them all on many more runs.

The group headed off the main road out of Melton and skirted along a ridge on the edge of the Lerderderg forest with plenty of sweeping roads, passing some serious horse studs and great views over the countryside. The Merrimu reservoir was a mill pond reflecting the surrounding views. The picnic area situated on the hilltop looked like a good stopover for a more leisurely drive. The Merrimu reservoir was at 73.4% capacity last month, a staggering increase from the 9% capacity in June 2010.

The run passed through some of those small farming communities such as Bullengarook: consisting of a school, a CFA and a sports ground. We skirted around a second reservoir, Rosslynne, before arriving for a brief stop in Gisborne. These breaks are a great opportunity to chat to other run participants but also seem to be an opportunity to compare and discover new car bling … or is that just my driver?

Leaving Gisborne we had a short but enjoyable and very zippy trip around the back roads. As the hills got steeper those properties got bigger until we popped out on to the Mt Macedon township road. From there it was onto an MX-5 dream road up and over the mountain, curling all the way down and into Woodend, stopping right outside the door of the Macedon Views restaurant with perfect Mazda timing.