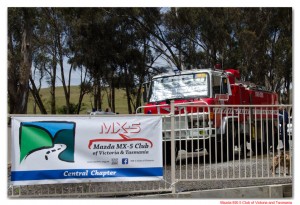 Our fourth annual run to the Strath Creek-Reedy Creek CFA

In the deadly 2009 bushfires that devastated Victoria, Strath Creek CFA lost two firefighters in the onslaught from the ’perfect storm’ that swept the area.

At that time their firefighting capability was restricted to a water tank on the back of a ute and their base was a tin shed with only rudimentary facilities.

In the aftermath that followed, in addition to the haunting stories of those that perished,  the plight of the firefighters and their families was also dramatically highlighted. Several of the CFA regulars and volunteers were suddenly thrust into the media spotlight with some areas in particular receiving a lot of publicity.

Many of the smaller CFA areas were equally impacted but their stories did not grab the attention of the press. It was in this context that the original run to Strath Creek was created in 2009.

Strath Creek is located approximately 100km North from Melbourne’s GPO with the local post office opening back in 1885, over 100 years before the term “snail mail” was coined. It is in the Shire of Murrindini and the township is located on the banks of a creek of the same name and, in the 2006 census, the population stood at 432.

The CFA is now housed in a brand new fire station 100m from the old one and they now possess a new fully functional fire truck of the type you would see in any local fire station. The CFA also serve the Reedy Creek area which does not have its own fire station or truck, however funding for the station has just been approved and the building may be in place for next year’s run.

Last year we got a tiny bit lost on the way to the starting point and just pulled up as the last cars were leaving – so this time we were there early but not before Ron and Wendy (thanks Don & Linda for the Melway reference!). No coffee shop! Ah well, there’ll be time for that later.

By the time Don called us together there was a good and colourful mixture of 17 NAs, NBs and NCs plus something that definitely was not an MX5, 29 people so several drivers out on their own. Two trial members who bought their red NA on Thursday and made their first club outing three days later, must be some sort of record.

We set off from the Reseach Shops taking the C728 and heading for Kangaroo Ground and plenty of roundabout practice before heading for Kinglake where the 2009 fires were devastating. Some great corners on the C746 and plenty of them, I expect the people who built the Hume had lots of corners left over and they joined them together and placed a good set here and an even bigger set 20km further along on the Myers Creek Road.

Sixty Ks arrived too early and the flat and straight roads of Healesville presented themselves with a compulsory and welcome stop at the Beechworth Bakery for that caffeine that we were by now so really looking forward to. Plenty of tasty treats to choose from and, we didn’t want to disappoint the very busy cash register operators so we checked out the apple square and a date scone.

Time for a chat about lots of subjects that included a pig called Crackling, dogs that locate truffles, best Club drives, how come Mazda only sold nine MX-5s in September (99 YTD), why they quietly dropped the soft top option from the new NC facelift and how relaxing it was to be sitting in the sunshine still smiling about all those lovely bends.

All too soon we were quickly slip, slop and slapping with the sun block before setting off, retracing our steps on the C724 and, being very careful with the cyclists we encountered, zoomed past Flowerdale and headed towards Yea where we noted several paragliders scraping the blue sky above the hills, soaring on the rising winds to our left. 20 minutes later we were veering left onto Strath Creek Park and the local CFA station.

The park was looking more developed than last year. A generous picnic table under shade beckoned and we all made it a friendly squeeze whilst we watched the CFA team undergoing some on the job training on survival in the fire truck – what initially looked like a clever system to automatically wash the truck turned out to be a method of keeping the truck cool while the fieries sheltered in the purpose built fireproof capsule behind the cabin.

BYO lunch was the order of the day before the hat was passed around and a cheque from the club started a collection to the CFA funds that they richly deserve. Then it was time for a few brave fieries to go for a spin in an MX-5 (“Just until they go white in the face,” advised Don).

More sun tan lotion and we retraced our steps, opting for the windy way home, as you do.