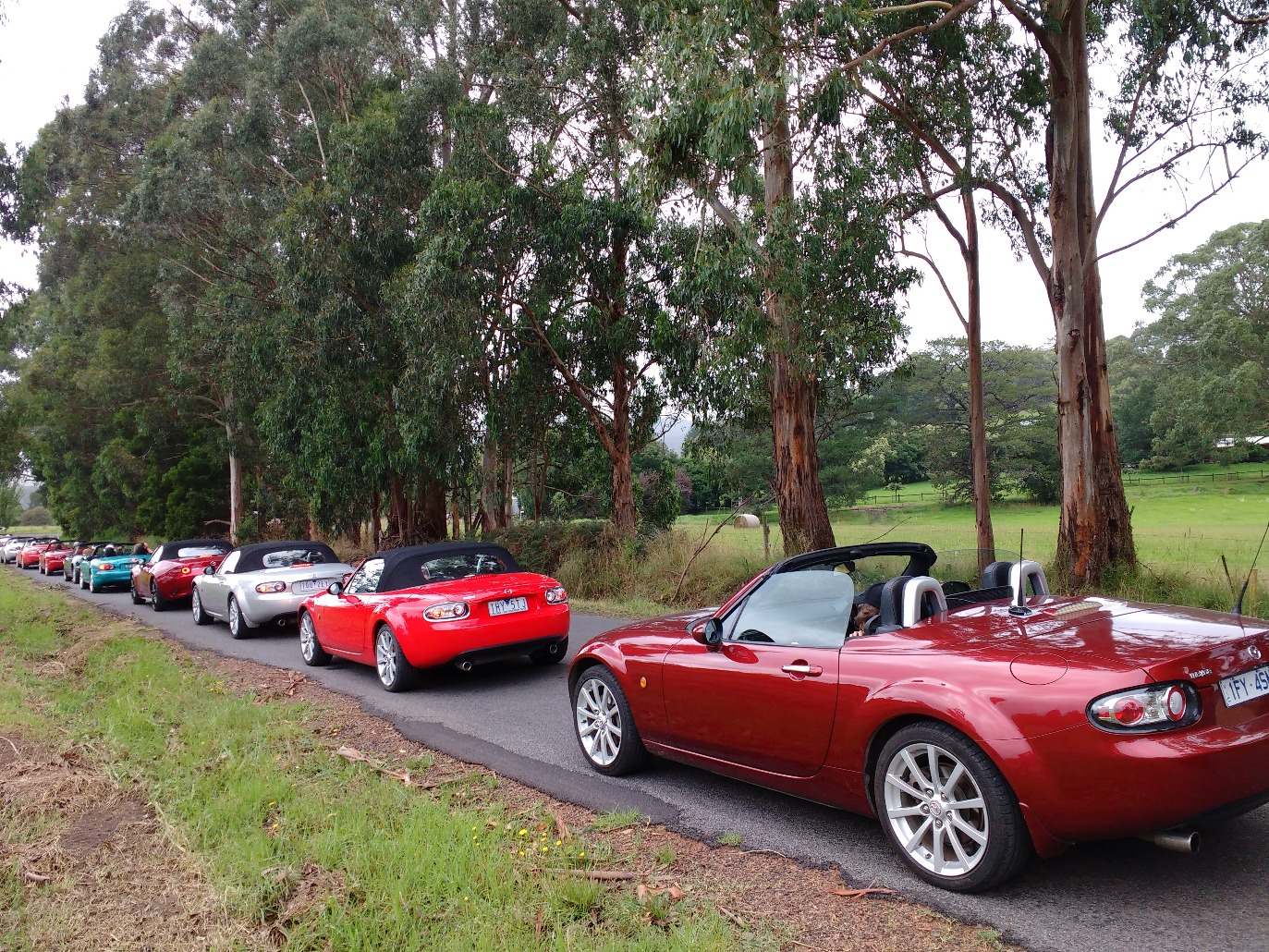 If you’ve never visited the Holden Museum in Trafalgar then add it to your bucket list … an interesting, extremely well- presented display of classic vehicles and motoring memorabilia (Ed: now the Holden brand is leaving us, it’s an extra good reason to get along and check out the ‘rusties”!).

It was here that eager MX-5ers gathered for the convivial meet and greet preceding the briefing for Eastern Victoria’s Alan’s Run.
This was to be a reprise of the first run Alan had planned some 10 years ago when he first joined the MX-5 Club.
Recent storms and flooding rains meant we would encounter leaf litter, branches and other debris, so a high-spirited run was not the order of the day.
Having 29 cars, we were split into two convoys: Group A led by leader Alan, ably assisted by navigator Leeanne with Tailend Trish and Peter at the rear, whilst Group B was headed by Bronwyn and Geoff Roche with Ferg tail-ending.
Group A ventured off under a cloudy sky, most with rooves down, and we left the highway east of Trafalgar to enjoy the bends of Sunny Creek Rd.
Just as we were all getting into the rhythm of a typically winding Gippsland road the convoy rolled to a stop with a road closure blocking our passage.
Discombobulated momentarily, our intrepid leader then radioed those iconic Aussie words “Chuck a U-ey” and so we retraced our route back down to Trafalgar and took the road to Mirboo North, warning Group B to re-route also.
Emerald-green pastures and beautiful rolling hills flanked the road and, if your roof was down, the heavy odour of the farms permeated the air mixed with the scent of the wet eucalypts and pines.
A pit stop was necessary at Mirboo North as Group B rolled in behind us and the usual chatter and tech talk ensued.
Then it was off for the next leg along more magnificent roads which included Love’s Lane and the stunning Grand Ridge Road, then through Boolara South and back to Mirboo North.
All were well and truly ready for refreshments and there were several options available … bakery, pub or cafés.
Those of us who decided on the pub were totally sated by very generous portions selected from their extensive menu.
Soon it was time to saddle up for the afternoon leg – the return trip through Narracan (great road!), on to the Moe South Road and back to the Holden Museum at Trafalgar via Thorpdale Road.
One driver failed to navigate a mean bend in the road and inadvertently deployed his air bags. Shaken but not stirred, he assures us we can all be confident in the integrity and safety of our MX-5s.
A much appreciated cup of coffee and debrief at the Holden Museum closed our day.
A great run Alan! Thanks from all of us.