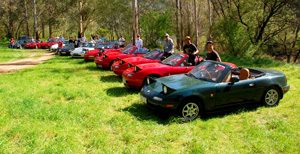 … and so started the Dargo Birthday Bash in Stratford at 9am. The run was organised by our prized Eastern Victoria Chapter L-plater Nic Bodey with the assistance of his dad, John Bodey.

What a fabulous turn out it was too, especially considering how many of the cars were from the Central Chapter (and here I was winging about an early start!!)  – 19 cars in total, with a whopping 13 of them being NA6s.

The run notes were the most impressive, I believe, that ANY of us had ever seen! Prepared by John Bodey, they included directions and distances and pictures. If there’s an award for run notes, I think the rest of us may as well give up now!!

As it had been my birthday the day before (unfortunately I was a little older than 25!), Dad let me have my first drive with the Club in his NA. Easy for him, of course, as he had his new baby NC to drive also; too many toys, poor man!

This arrangement worked quite nicely for my six-year-old, Alyssa, who was happy to car hop all day. I’m going to tell you right here and now, I was nervous as hell. I have given these boys so much stick verbally over the years that I was deserving of a good amount back and this was a perfect time for it! Needless to say, I hung with Tail End Charlie for the first part of the day. This was Rob and Mel, and I knew she would injure him if he was nasty to me – we girls gotta stick together!

Finding the groove turned out to be relatively easy. With absolutely amazing weather and 101 questions being fired at me by a six-year-old, I had no time to get uptight anyway.

Our first stop was at Briagolong. It was here that I was ditched by my daughter because I was coming last and Pa was second, “so he must be going much faster and I want to be in a fast car Mum” – so much for girls sticking together!

While enjoying the leisurely toilet stop we were passed by a large convoy of Harleys which pulled up around the corner. Nic continued to impress me when he pushed his sleeves up and waltzed up to the biker crew … to find out if they were headed to the same lunch destination as us and to ensure that we didn’t all land on their kitchen all at once. Finding this to be the case he also got us back on the road quickly to avoid being caught behind them.

Aside from the occasional strong essence of road kill, the weather and roads could not have been nicer. The warmth and the flow were, at times, somewhat hypnotic and I had to turn some music on to avoid being lulled too far! As was to be expected with such a big group, by the time we reached Dargo we had quite a large gap between a front team and a follow up team. We finally started to hear the radio calls, from the front team, as we parked at the pub. Sounding extremely relieved we were advised they were waiting for us to do the last fun bit before lunch.
By this time I was a lot more confident and over being at the back so I took off like a rocket behind Peter Shinn to catch them (within the legal speed limits of course).

Heading up an incredibly steep incline it wasn’t long before one of the cars decided to overheat. A couple of support cars pulled over to help as Peter and I took off up the mountain, free at last! Thank you so much Peter! He drove hard, allowing me to follow his driving lines, watch out for his gear changes and, most importantly, blow those damn cobwebs out of the exhaust.

I’ve not felt so exhilarated in a LONG time – I love driving hard! Unfortunately we had to stop and turn around about 15km on as the bitumen ran out. But the drive down was almost as good when I positioned myself as about the fourth car back and played with those I have always considered The Big Boys who know how to drive really hard! I think I could get the hang of this, Dad … want to sell your car?
Well, despite Nic’s efforts, we and the Harleys arrived on the Dargo Pub at the same time! Credit where credit’s due though: the staff presented lovely meals, of great size, in record time – I couldn’t believe it. Those guys have got their stuff together!

Quite a few teams broke off from the run after lunch to shorten the long trek home. Thankfully by this time I had convinced my daughter that I could drive fast enough to be graced with her presence and she again joined me as my co-pilot. Those of us who stayed on were not only spoiled by the glorious roads back to Stratford but also a local wine and coffee bar with a relaxing  beer garden where we gathered to recap the day’s adventures.

Thank you Nic (and your ever-trusty assistant, John) for an amazing run and the perfect way to celebrate the ‘Classic’ birthday of the MX-5!