Summit to the Sea 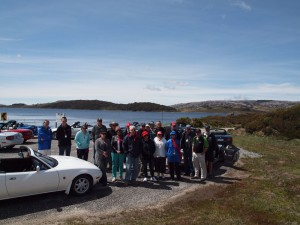 Early on a brisk Saturday morning, 12 cars assembled in the car park of McDonald’s in Wodonga.

We had several visitors from the Western Victoria Chapter and one from Central Chapter, all looking forward to a run from one side of the State to the other and back again.

After some had endured the necessity to eat breakfast at McDonald’s, we assembled in the car park to catch up with old friends and to conduct a brief meeting before getting on our way at 8am.

The first part of the run took us down towards Mt Beauty where we stopped for coffee before heading up into the mountains over Falls Creek. We stopped on the wall of the Rocky Valley Dam for a group photo shot and whilst there a large convoy of Clubmans shot past.

After a short break we headed off across the plateau before starting the descent to the Omeo Highway intersection and then into Omeo where we stopped for lunch. The Clubmans had also chosen Omeo as their lunch stop so there was much discussion between some of our group and theirs.

Back into the cars after lunch and we were off for the beautiful drive down through Swifts Creek, Bruthen, Bairnsdale and on to our overnight stop at Paynesville on the Gippsland Lakes. Our run organiser, Stuart, had chosen well as the motel had great rooms and was perched on the edge of the marina.

Some were up early for a walk along the edge of the lake before meeting up at Fisherman’s Wharf for breakfast which was a vast improvement on the McDonald’s one the previous day. Central Chapter member, Greg Jordan, had a flight to catch later that afternoon and had to leave us after breakfast to return direct to Melbourne.

We were on our way by 10am for the drive back up to Omeo which was to be our first stop for coffee. After a quick break we were back in the cars. We were doing the return trip via Mt Hotham along the Great Alpine Road.

Just before Hotham Village is the Dinner Plain resort where we stopped for a rest and toilet break. While standing around in the car park under a reasonably sunny sky we had a snow storm. Actually it was just a few flakes falling out of the sky but that’s about as close to a snow storm that I’ve seen, or ever want to see.

Our final part of the run was over Hotham then down the mountain to Harrietville to finish the run in Bright where we had a late lunch. Goodbyes were said and, reluctantly, we all headed off home … apart from some of the Western Victorians who stayed overnight in Bright.

On behalf of everyone on the run, thank you to Stuart and Sue for organising such an enjoyable weekend.