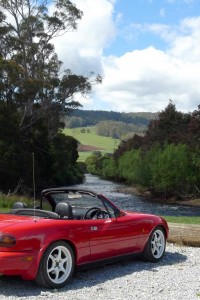 This is the life!

Keith and I, usually fairly well organised (Keith’s influence), had nominated a meeting time of 9.15am at our usual Devonport meeting venue.

However, a late night had us scampering around at the allotted time with a flat iPhone and no car charger in sight. Reluctantly we hurriedly headed out without it, knowing as organisers a phone could (and would) have come in handy, and at 9.20 we arrived to find three cars waiting for us with drivers good humouredly ribbing us for our tardiness.

Well … that made four cars and no-one else from the north … until … finally … seven more cars arrived in convoy from Launceston way. More ribbing, more excuses admidst much laughter and jibing amongst good friends … at last, time to go.

Heading out of Devonport in perfect conditions (not too hot, no icy winds blowing), we set out in a westerly direction through the Don village, on to the picturesque Forth valley and turned on to the Kindred Road where we delighted in driving through Tassie’s best rural farmlands – rolling paddocks, spring crops planted, new born calves at every turn and farmers busy at their seven days per week commitments on the land. Turning left through Sprent we headed south, the roads becoming narrow, traffic almost non-existent, and our little MX-5s humming along beautifully in the sunshine.

South we went, heading through forestry plantations until we found ourselves on straighter roads. Unknown to the group, we had missed our turn off and were “flying blind”. Nevertheless, an enjoyable 10km sweeping loop found us heading back to where we should have been in the first place, our nonchalance disguising the moments of panic in the lead car. Couldn’t have planned it better … the loop led us back to the intersection of Central Castra Road, which pointed us through windy gullies and steep, narrow roads. Following the Preston Road we wound our way to Raymond Road past some beautiful waterfalls, making a mental note to stop there “next time”.

Much enjoyable zoom, zooming and we wound down the hill with fabulous views of Gunns Plains, a verdant, fertile and productive valley which is also home to famous limestone caves (another mental note!). This area previously grew hops but farms, orchards and wineries still abound.

We wound our way around flat, green pastures with the Leven River bubbling alongside, until we arrived at Wings Wildlife Park, our morning coffee stop. Picnic tables amongst man ferns with the sound of the river close by was a welcome way to spend almost an hour. Unfortunately, our demands for caffeine were too much and the café’s cappuccino machine went on strike, so some poor souls forfeited the offer of instant coffees for delicious icecreams instead. Wouldn’t you know it, I was the “lucky” one with a coffee!

This is where the fun began – a wrong turn to get out of Gunns Plains saw 11 beautifully polished and previously much admired MX-5s heading up a narrow gravel road copiously coated with Tassie’s rich, fertile, chocolate brown soil generously laden with … cow manure … and nowhere immediate to turn around! Oh dear – our popularity rapidly dropped at least five points! Backtracking, we finally headed off in the right direction climbing up along the hillside, once again with spectacular views of Gunns Plains, until we ventured into heavily wooded areas interspersed with farms and got into the rhythm of more swinging, rolling corners. (We did strike a small area of road works midway, with a few hundred metres of clean gravel road – however everyone had been forewarned of this section and so, hopefully, we were forgiven.)

After 30 minutes of previously untraversed roads by our group, we found ourselves in the Upper Natone area where we peeled off to the left to head towards Upper Stowport. Eight cars followed … and the last of these watched in consternation as the other two went straight down the road, their view of the intersection hindered by a large farm vehicle which had pulled out onto the road. Two-way radios were quickly put to use, and some 7-8 minutes later our tail-enders re-joined our group. Tally ho! … rounded up we drove on our pre-determined route, apparently only to get to the intersection where the two cars in question had turned back to rejoin us!

Okay, enough excitement for the day! We progressed through Upper Stowport, down beautiful winding roads unhindered by much traffic, into Fern Glade, an unspoiled, natural picnic area in the Burnie municipality (yet another mental note!). Heading south from Fern Glade we sedately drove through built up areas until we reached our luncheon destination 5km away – the Emu Valley Rhododendron Gardens where lunch was prepared for us by volunteers. Sitting in our private glassed dining room with balcony, looking over 11 hectares of rhododendron gardens, completely cleared, planted and run by dedicated volunteers over a period of 30 years , we soaked up the ambience, floral scents from the gardens and sunshine as we lingered over fruit and cheese platters and refreshments. A few keen nature lovers amongst us enjoyed a walk through the winding trails dividing world “continents” planted with varieties endemic to their countries.

At 3 o’clock we headed back along coastal scenic roads bordering Bass Strait from Burnie, travelling east towards Devonport through Sulphur Creek, the little tourist village of Penguin, Ulverstone and Devonport. Several of our northern friends waved us goodbye as they headed for their one-hour drive back to Launceston, but most of the group ventured back to the Tillacks’ home for a final hour of socialising, and planning of our Christmas function, before going their separate ways.