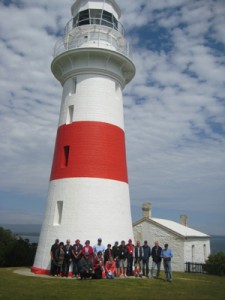 Once upon a sunny October day in northern Tasmania where all roads were built for the MX-5, a group of eager MX-5 drivers and navigators met for what has become our annual Mystery Run devised by Alana and Trevor.

With all participants having been forewarned to ensure their life insurance and pre-nuptial agreements were up to date, the argument (instruction) sheets were passed out at intervals and off they went – leaving Rocherlea Tavern, heading for Karoola and the unknown.

First hiccup was that a trucking company had changed its name in the past week, so that clue started the stress.

Bringing up the rear just to make sure all were OK, I came across Roger and Ted having to reverse because of not reading instructions … only then to catch up with Bruce and Cheryl who were going only they knew where … especially when their answer sheet told us that trees had been abducted by UFOs and the winery was sloshed. Other answers could not be published.

The object of the clues was that all cars had to be at Low Head Lighthouse at 11.45 because at 12pm every Sunday local volunteers run the machinery that operates the Type G diaphone fog horn. This is the only working example in the world; it is also the largest one ever constructed (it has a range of 32km). With our ears still ringing we headed to lunch at The Pier Hotel in Georgetown, operated by our members Robert and Yvonne.

It was now time to mark the argument sheets, do some marriage counselling and find our prize winners.

After a great lunch the party, all back on speaking terms, headed to the other side of the Tamar River for the family photo on the wharf at Beauty Point. Then off we went for a blast around some of our favourite roads around Beaconsfield and Howell Gorge, with the final destination being the Blue Barn Café for coffee and more tales and stories of the day we all had on our Mystery Tour.