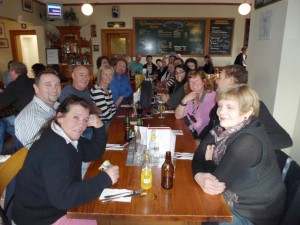 So it’s the middle of the year – cold and quite wintery.

What better way to celebrate the middle of the year than getting together with the Southern Tassie Chapter to mark the winter solstice … even if it was a little later than the calendar!

The run began at Bellerive as usual, with the Chapter gathering in the morning for coffee and chat. It was really pleasing to see the strong turnout; we had 12 cars in the car park with the prospect of another two couples joining us later for lunch. It was great to meet new member Lisa Gershwin, who bought along her 1989 Classic Red NA for us to admire.

The convoy left Bellerive in sunshine, but with the roads damp in places from some overnight rain. We drove east from Bellerive towards Sorrel, on our way to the beach suburbs of Lewisham and Dodges Ferry. It’s a pleasant drive … some ocean views and slow winding roads. We then made our way back to the Tasman Hwy and on down to Dunalley for a morning tea stop.

Morning tea was nice, sitting outside looking over the bay and Dunalley canal. We met up with a vintage motorcycle group and had a chat about old motorcycles and more modern MX-5s. We eventually got back on the road; I think it was Jo’s talking about her motorcycles that eventually got the group moving again!

So we headed back up the Tasman Hwy and eventually to Richmond, where we were booked in for our Ausmas dinner. Nicely early for once, we parked the cars and made our way into the Richmond Arms for lunch. We nearly filled the dining room with our throng – a great sight to see.

There was lots of convivial conversation as we waited for lunch to arrive. I had promised the Chapter a few prizes for attending and we were fortunate that Nils and Billy generously donated an MX-5 picnic set they received at NatMeet this year. Our happy winner was Maureen Whittle, with other members winning wine and keyrings.

Thanks to the Chapter for a lovely day.