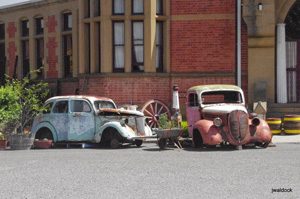 A summer twilight run sounds so tempting -– tops down, a short but fun drive through the countryside and afternoon tea with friends …

Nothing, except the weather gods had taken the day off and had forgotten to turn on the summer weather before they left.

Of course, being (mostly) native Tasmanians, everybody turned up at the meeting place wearing typical Tassie summer clothing: hats, coats and scarves!

We had a great turnout with 12 cars in the group. New members Ed Podolski and Nigel Honey came along and it was great to meet them. We also met Quentin Jones, who joined last year and popped past to say hi and show us his new, cool silver NA.

After the usual chat and drivers’ briefing, we headed off for a short run to New Norfolk. We headed off the highway, taking a detour along Glenlusk Rd, which is narrow and winding and lots of fun. Rejoining the highway we arrived in New Norfolk a tad early, so we decided to take another little loop north of the town, arriving back just in time for afternoon tea at the Patchwork Café.

The café is situated in the grounds of Willow Court, the historic complex of buildings that used to house the lunatic asylum for greater Hobart (there’s a lot of folklore surrounding this building, but that’s another story…). The complex has been converted into various shops, and the café is in the converted old chapel.

Afternoon tea was lovely, and it was nice to get together with Chapter members and catch up on Christmas and holiday goings on. The café owner was very keen that we park our cars on the lawns so that he could take some pictures of us for his Facebook page, which we did after much manoeuvering. After which, we all headed back down to the highway home.