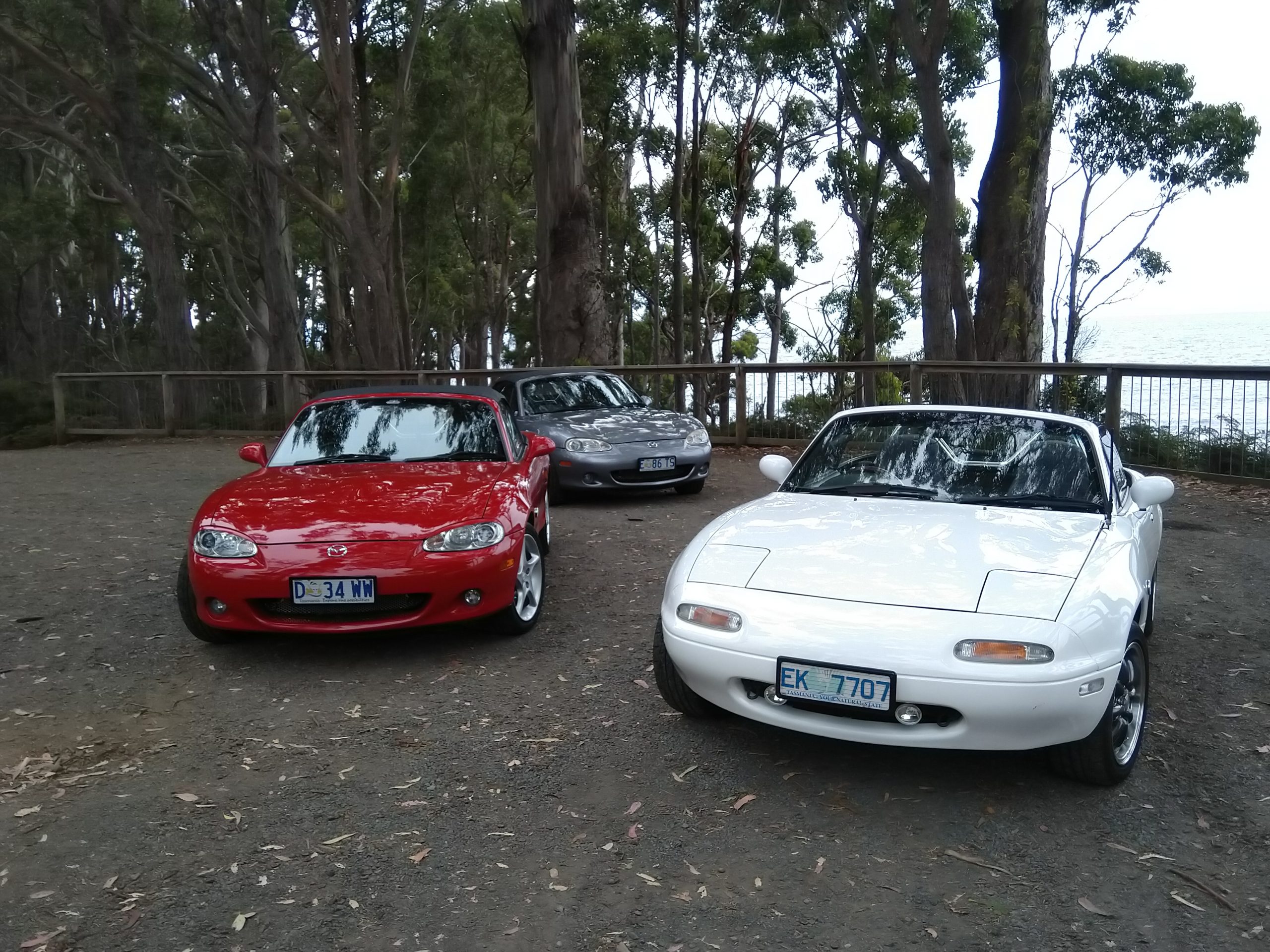 Bruny Island is located about 40 kilometres south of Hobart and is a popular weekend and holiday destination.
Generations of Tasmanians have spent their summers enjoying barbecues at their shacks, walks along the long sandy beaches or watching penguins return to their burrows at night.
The island is separated from the Tasmanian mainland by the D’Entrecasteaux Channel, meaning that the only way to visit was by a short car-ferry ride from Kettering.

Historically the roads have been bone-rattlers – unsealed and corrugated, but the regular visitors and residents didn’t mind as they discouraged the less adventurous from visiting.
Things have changed in recent years though. The main road on the island has been sealed from the ferry terminal at Roberts Point to the island ‘capital’ at Alonnah, and the main holiday town of Adventure Bay. The road is of a good standard and is a pleasant drive, particularly in MX-5s. Several small enterprises have sprung up along the way, ranging from a honey farm and chocolate maker to eateries.

Unfortunately, the island isn’t the best destination for a regular Club run – there is the cost of the ferry and there can be considerable waiting times, both disadvantageous to a largish group.
But it’s a great destination for a small group on a mid-week run.
On a coolish Thursday in February, three couples met at the Chapter’s semi-regular meeting point in Rosny. Chris and Elaine brought their spotless red NB, Sandra and David Pitt were in their white NA, while Rob and Di Tanner were driving David and Sandra’s other MX-5, a 2002 NB Titanium edition. This was most appropriate as Rob and Di had recently sold their own Titanium.
The group set out across the Tasman Bridge and through the city to the Southern Outlet on the way to the ferry terminal at Kettering, about 40km away.

On arrival at Kettering there was a short wait for the ferry – just enough time to buy a coffee. Soon we were loaded on to the ferry Mirrumbeena and had time to watch some last-minute work being done on its replacement which was berthed alongside.
The trip across the Channel takes about 15 minutes and is a pleasant break to chat and admire the scenery. We were bemused to see a small tug boat waiting to assist us with berthing if necessary. Perhaps the poor Mirrumbeena needed some maintenance.
Our cars caught the attention of one of the ferry’s crew as we disembarked, commenting that the “RX-7 Club” was on board. Oh well, at least he knew they were Mazdas.
Once on the other side we set out in convoy on the 40km drive to Adventure Bay, the site of two visits from Captain Cook during his voyages of discovery. The road is of good quality, gently undulating and pleasantly windy in places. It passes through some lightly wooded country, farmland and skirts along the side of the water at The Neck.

At Adventure Bay we stopped for some photos and a toilet break before heading off again Mid-week run to Bruny Island what we can look forward to….to Alonnah, about 20km away. Alonnah is where the last remaining piece of Hobart’s unique floating bridge can be seen, where is acts as a jetty.
After negotiating some roadworks, where there was another comment about our cars, we arrived at Bruny Island Premium Wines for lunch. It claims to be Australia’s southern-most vineyard and offers a good lunch menu.