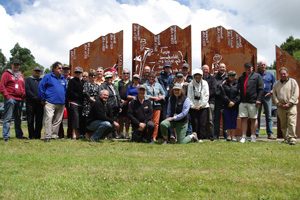 It’s our Australia Day Run – what better way to celebrate our great country than zooming around in a MX-5 with a terrific bunch of like minded Aussies?

We started with nine cars meeting Jeff Woolf at Phoenix College in Sebastopol to travel out to the Royal Palace of Everett in the Kingdom of Wallinduc. In true Western Victoria Chapter tradition, a tradition that was set in concrete by former Chapter Captain, John Gleeson, a U-turn was performed at Smythesdale with Jeff having turned at a town too soon!

Zooming through Cape Clear they decided to check out the lighthouse without an ocean before travelling on to the Everetts’ for morning tea. What a sight the convoy made rolling into the royal driveway where King Alan and Queen Dawn and their loyal subjects – the Gillicks and the Roches and, last of all, we commoners the Bradshaws.

After lots of chit chat and an over indulgence of morning tea, Captain Ian welcomed everyone to the run, including new members Travis Bawden and John Thorne on their first run as well as those from the Central Chapter and North-Eastern Victoria Chapter – great to see new faces joining us.

We then lined up at the palace gates and, with 13 cars in our royal convoy, headed off to Lismore where we went past the old, now-dilapidated flax mill. It was then on to Pomborneit to meet up with two cars from Geelong and one from Melbourne … although we had to send Ian in search of them – they had gone walkabout around the Pombo Market.

After this we zoomed around Lake Purrumbete and onwards to Cobden for a “quick” toilet break but, with 17 cars, there was nothing quick about it! Rounded up once again, we ventured on to Simpson for lunch with the rain putting in an appearance as we pulled up, so the roofs were quickly raised and a mad dash was made for the undercover area. A little rain was NOT going to dampen our enthusiasm for fun!
Some had to search for food at the local supermarket as the only takeaway shop was closed – for a 90th birthday. After grazing and yacking for about an hour we headed off again, (some with the roof up, some down); this time we went a round-about way to Gellibrand then had a regroup at Beech Forest, where we had a quick talk before heading on to tackle the non-stop curvy corners of Turtons Track – which presented a few more challenges than usual with a lot of traffic going in the opposite direction.

We did another regroup at Forrest where we farewelled four MX-5s which headed back to their homes. The remainder of the convoy headed off towards Colac then Cressy where new member Travis left us. We had a change of leader with King Alan and Queen Dawn leading their royal convoy  of loyal subjects back to their palace for an Aussie BBQ.

We had a right royal time talking about everything under the sun and bragging about our MX-5s, making new friends and of course feeding our faces. We celebrated Patrice Van Velzen’s birthday, which was the next day (26 January – Australia Day) and Bob de Bont’s birthday from the previous day. Of course the birthday cake was a passionfruit sponge that was quickly devoured, even though we were stuffed to the hilt! All too soon it was time for everyone to abandon the Palace of Everett and head for our respective homes, after a day thoroughly enjoyed by everyone.

A big thank you to Alan and Dawn for welcoming us into their home for morning tea and our Aussie BBQ. It was very much appreciated by your royal subjects.