The trek north-west to Bendigo 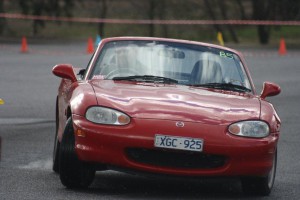 Round 5 of the NGK Victorian Motorkhana Championship for 2012 was held on 5 July, hosted by the Holden Sports Car Club of Victoria.

The MX-5 Club was represented by Troy and Tony Heasly in Troy’s NB8B, and Bob de Bont in his NB8B. We set off from the BP Outbound on the Western Highway towards Bendigo under threatening skies which became real as we approached Bendigo. However the weather cleared as we crossed the divide and on to Henty Livestock Exchange. We were met by Mark Szutta in his NB8A who had stayed in Bendigo to avoid a (very) early start from his home at Phillip Island.

We were greeted with sunshine and a damp surface with a good amount of clear sky as we prepared our cars for the day ahead. The cars were scrutineered and we caught up with the latest happenings. A large number of participants had entered on the day resulting in a delayed start. After the drivers’ brief we headed to our first test area with Frank Rogan from HSCCV sharing Bob’s NB8B for the day. In all there were 44 competitors entered, with eight in Class B. Of the eight cars in class B, four were MX-5s and two of these were double entered.

We were presented with three test areas and an opportunistic 15 tests planned for the day. During the day the weather cycled between sunshine and fairly heavy rain, however the lunch break was fine and allowed for more socialising before recommencing the battle. The day finished about 4pm by which time we had completed 12 tests, an excellent achievement considering the late start.

We prepared our cars for the return trip, repacked our flag and the team headed for home. As we entered the outskirts of Bendigo it started raining and steadily increased to become a downpour which stayed with us until Sunbury. We stopped at the BP inbound for a quick coffee, leg stretch and farewell before heading home.

Thanks to all who participated and made for an enjoyable day. 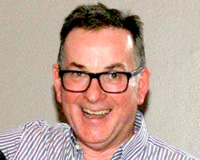 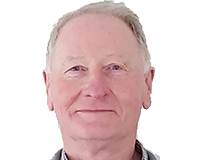